The multi-chamber welded design has many advantages; obviously having multiple, completely welded and separated flotation chambers is the precisely ideal design in terms of safety. 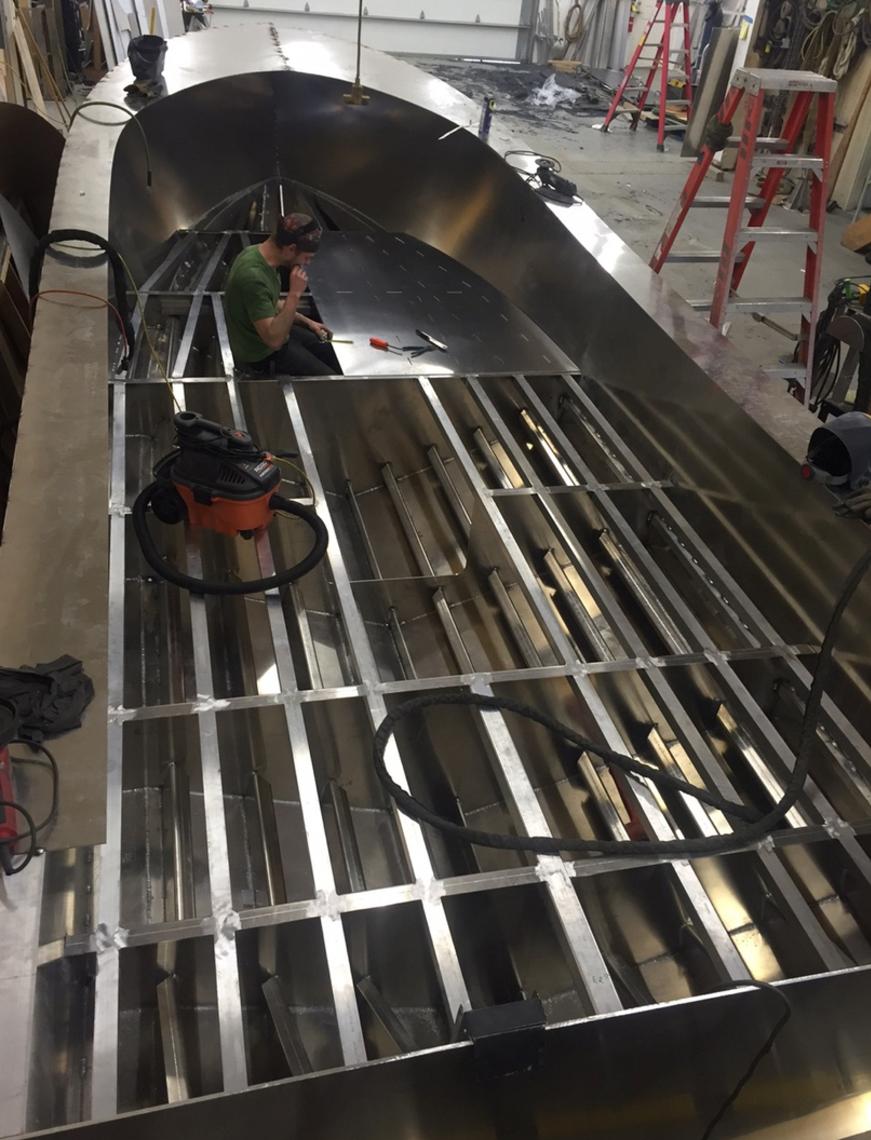 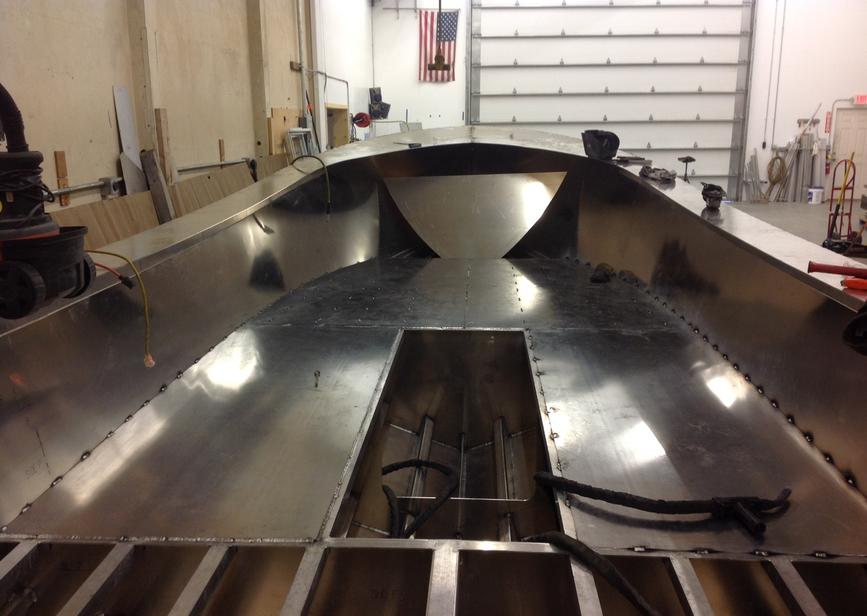 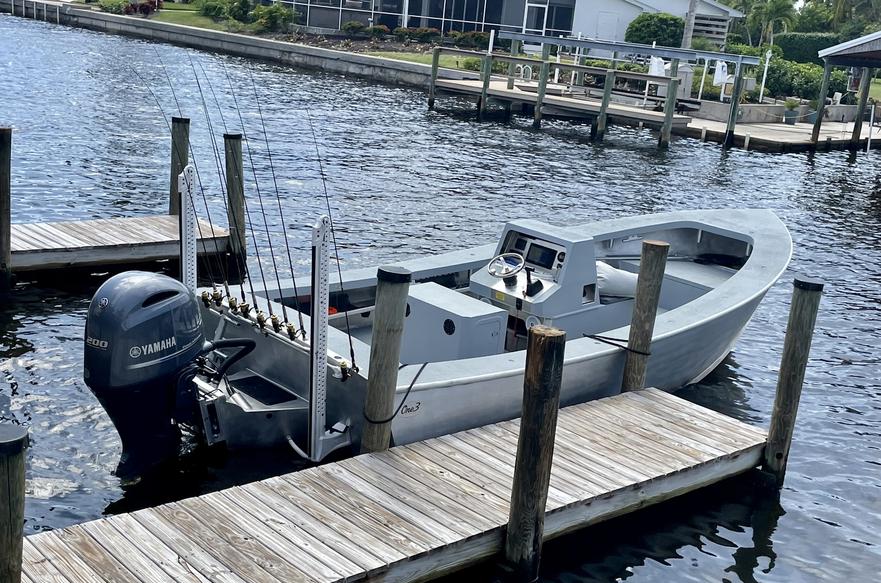 MISS HAYDEN  and  The Iron Maiden are different than any other fishing charter vessels operating in Southwest Florida in that they are built of Naval Grade Aluminum Alloy Materials. Welded Metal Construction is the Strongest and Safest method of boat construction!

The construction feature Our Charter Boats have in Common with the vessels operated by USCG and US NAVY is the heavy duty WELDED ALUMINUM construction and advanced computer aided design. Another similarity not to be overlooked is that our vessels are purpose built, meaning they were both designed by Captain Frank from the ground up for the specific charter fishing task they are utilized for, we don't use generic, poorly designed and built "off the car lot" type vessels, like many charter services.

The following section will go into detail regarding the evolution of our specialized and purpose built, 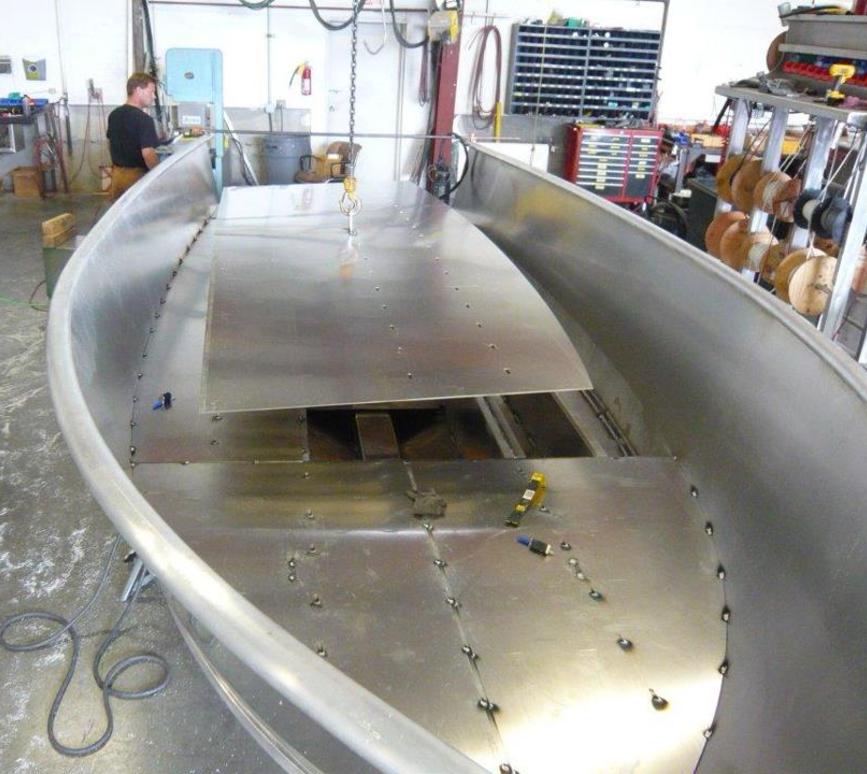 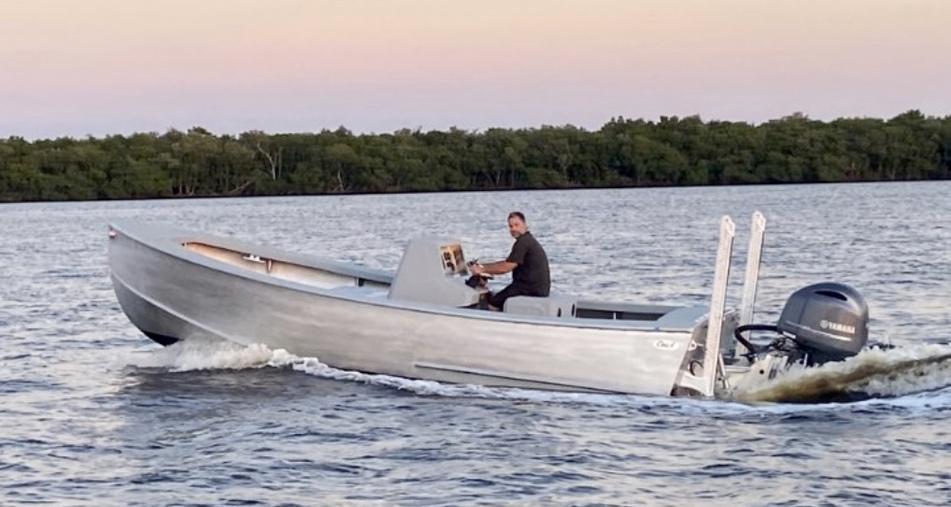 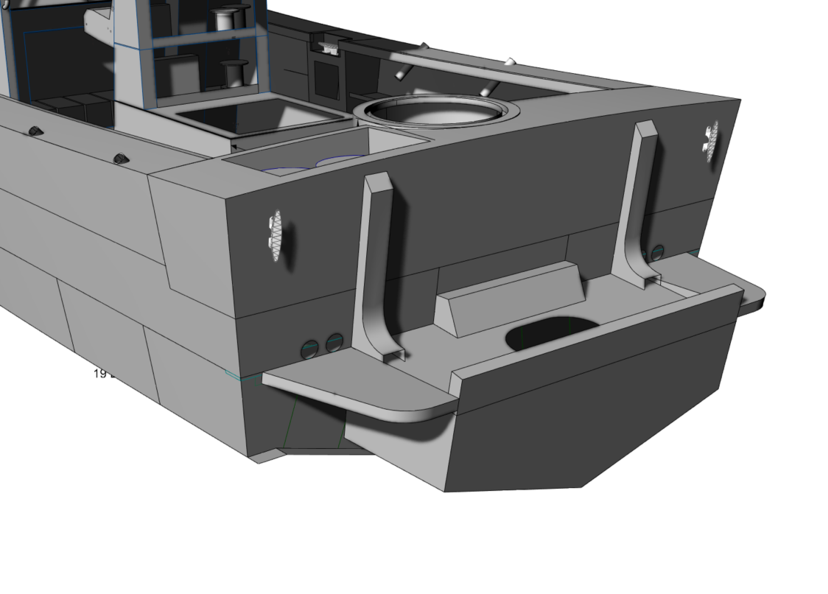 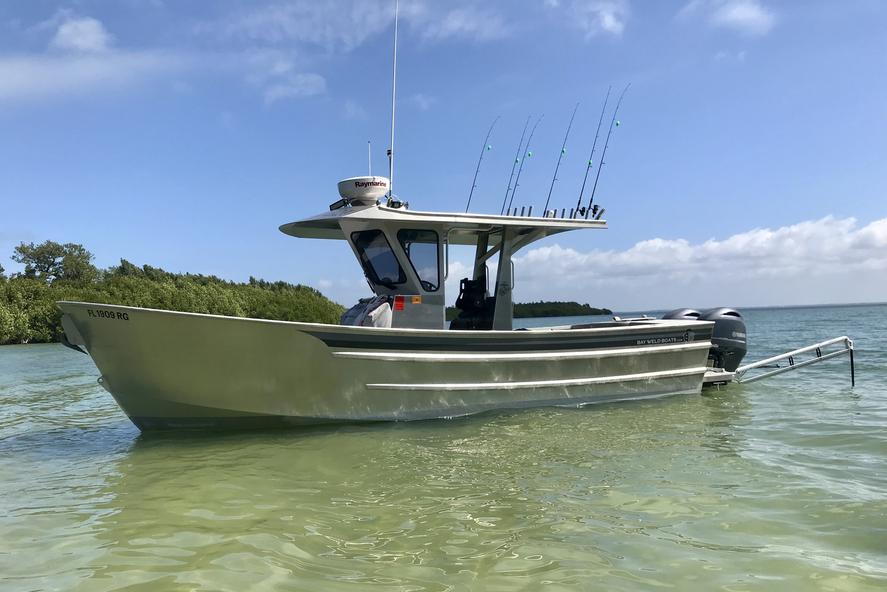 Under deck view of Miss Hayden

The Iron Maiden's under decks are also a strong, welded multiple chambered design, with a sealed flush deck. 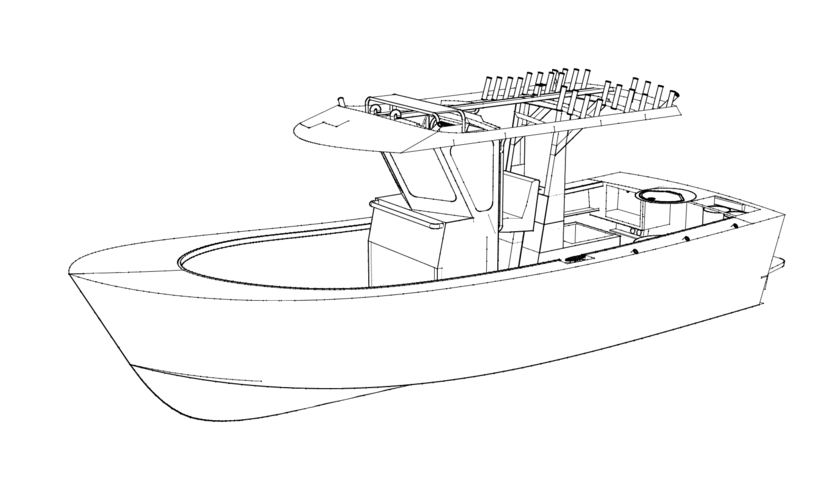 The multi-chamber welded design, is capped and sealed by a flush deck. "Flush Deck" design is the strongest and safest way to build a commercial or military grade Hull. Flush Deck means that water does not flow into the hull, to be later mechanically removed with a bilge pump system like most vessels, the decks are completely sealed and water only flows on top of the hull surfaces never penetrating inside the vessel.

MISS HAYDEN is 29' long and 10' wide, she was custom designed by Captain Frank and built by Bay Weld Boats of Homer, Alaska in 2017.

​Underneath the deck of both our boats is obviously solid and strong, there are many separate chambers which are welded sealed and separated during the construction process, trapping many separate sections of air flotation inside. Multi-chambered design makes our vessels virtually indestructible and unbelievably  strong, durableandsafe should a unexpected storm arise.

One design concept from Captain Frank's note books was that all of the "thru hulls" in Miss Hayden be isolated within the design of the boat. Thru Hulls are where water flows in to the insides of the boat for various purposes, (water to feed the bait tanks, or cool a motor for example) they also represent the most common vulnerability in virtually ever boat ever built.

Many boats have sunk when a thru hull has broken and caused flooding below decks, it is actually one of the most common ways boats sink.

This is one reason why he chose the strongest method of boat construction possible, which is the welded aluminum style, over the inferior fiberglass construction typical to most mass produced boats.

On MISS HAYDEN all thru hulls have been completely isolated from the rest of the boat inside a specially designed welded aluminum tank / motor bracket or "swim step" in the back of the boat, this design feature makes MISS HAYDEN on of the safest boats ever built of its type.

MISS HAYDEN and The Iron Maiden were both designed by Captain Frank for the specific task of charter fishing. MISS HAYDEN was actually first designed based on drawings and ideas compiled in a few note books, over a period of 15 years and drawing on experiences gathered from Captain Frank's life on the water.

Captain Frank spent his entire life on boats and ships of some kind or another, being born and raised in Sanibel / Fort Myers / Cape Coral contributed certain types of experiences, mostly small craft and fishing vessels, while crossing the Atlantic Ocean and the Pacific Ocean in the Marine Corps added bigger more significant experiences. Finally living in Okinawa Japan in 1998 and then Hawaii from 1998-2011 (where he first learned to commercial fish and surfed) added a whole separate type of experiences, mainly fishing in giant seas and surf out of Haleiwa, Waianae and Hawaii Kai.

Every experience from a lifetime at sea contributed to some attribute of the boats final layout.

Captain Frank crossed the Atlantic in September and October of 1997 while a member of the 24th Marine Expeditionary Unit, Special Operations Capable, the ship he was aboard was surfing 80 - 100 foot seas for a few days on its way to Portugal. The experiences of being at sea for days and nights on end in the middle of the Atlantic, for Hurricane Erika (a category Three Hurricane) and Tropical Storms Fabian and Grace left a lasting impression.

The experiences and observations gathered from over 24,000 miles at sea in the Marines combined with the childhood memory of his Fathers fiberglass Aquasport boat sinking off of Sanibel Lighthouse, lead him to want a boat with sealed welded air tight chambers below deck. After the Marines he visited a friend in Sitka Alaska and saw the fleet of welded aluminum boats being used by the charter and commercial fleet there, he decided that if the U.S. Military, U.S. Coast Guard and most of the commercial boats in the Bering Sea were made of welded aluminum or steel that had to be a better construction type than the fiberglass vessels that are so common in Southwest Florida.

Eventually the ideas compiled in his note books were sent to Bay Welding of Homer Alaska, one of the finest builders of custom Aluminum boats in North America.